First day in Amsterdam (more like half day, first few hours were spent in the airport, and jetlag is about to claim the remaining evening hours. What follows is a confused, sleep-deprived, rambling first impression of the city.

It is by far the busiest, most crowded, relaxed place on earth. I don't know if it's the tourist crowd, or the presence of so many byciclists, or something in the air (more on that soon), but it's a very relaxed place. Traffic is a snarl, pedestrians step aside to let a tramway rattle down the street, byciclists are brazen lords of creation dominating the lanes, and pedestrians happy to ignore most designated crossings. It's dizzying and a little nerve-wracking at first, but I gradually got used to it.

Gastronomically (I was starving so looking for sustenance was a major preoccupation), Amsterdam seems to be dominated by Burger Kings, a local cafe chain, and for some reason Argentinian in specific, and Latin American restaurants in general. The Indonesian cousine for which Amsterdam is supposed to be famous for is present, but in less amounts than I was led to believe. Lots of Italian places too. You have to order bitterballs - a Dutch delicacy. It's like a spicy meat falafel - delicious! Prices on food everywhere I looked have been very reasonable even with the current Euro-CAD exchange rate. Ignore the area around Damplatz, and Leidseplein, and eating in Amsterdam will be cheap and excellent. Leidseplein has a lot of restaurants but they tend to be either chains or aforementioned glut of Latin American and Italian restaurants. 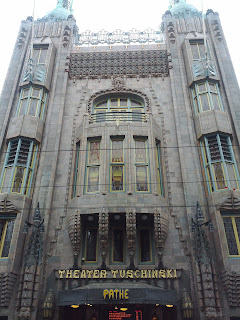 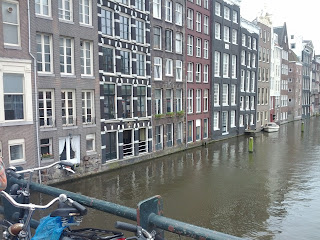 Went on a three hour walk around the city, it's beautiful and there is a ton more to see. Every street seems to hold a dozen neat places at least. Like this amazing Art Deco/Art Nouvelle movie theatre (above). Yes, it's still a movie threatre today. So much of downtown looks like it would've 400 years ago in the Golden Age of Amsterdam. The fronts of  buildings enter right on the canals, while protruding cranes seem ready to reach down onto the waiting barges and winch up furniture or bales of goods from far-off exotic places. Each building seems to hold some interesting detail waitingto be uncovered by a patient observer. Also, I'm not sure what the deal is, but some older buildings appear to be leaning forward... On purpose it would seem. The effect can be a tad disconcerting but neat. 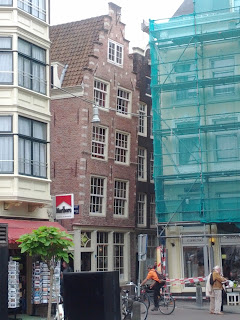 Despite the initially dangerous-seeming traffic, Amsterdam is a very pedestrian-friendly city, and the air is very clean! Walking in downtown Toronto right now would probably induce asthma. The only exception to the quality of air is the cigarette and pot smoke. More people smoke outside than I am used to, and the smell of pot is pretty pervasive in some parts of downtown. Yes, coffeeshops and various pot smoking paraphenalia is everywhere, on major thoroughfares and pedestrian arcades alike. I stopped noticing them after a while, but the air pollution produced by purveyors of such places is unmistakable. The city is very clean save for cigarette butts, kind of a weird juxtaposition.

OK, I'm starting to wax verbose, and I'm heading to bed! Tomorrow, hitting three or four museums, and another walk of the city!