No visit to Amsterdam should go without a canal trip. Most of them leave from a spot near Konings Plein, and the price for a 1 hour excursion is very reasonable. Go early in the morning, that way your boat will be mostly empty (like mine was). If you are willing to spend more you can even hire yourself a small boat with a driver who will double as your tour guide. If you are feeling adventurous you can even hire a canal bike and pedal down the canals. The tour is really great though, I got to see many landmarks from this perspective, the tour itself was entertaining (apparently three cars a week end up in the canals every week due to poor parking), the Amsterdam house boats (and garden boats, and workshop boats, and museum boats, and the decrepit-boats-that-double-as-duck-nests boats) are very neat. Anyway, the canal trip is cool, take it if you get the chance! 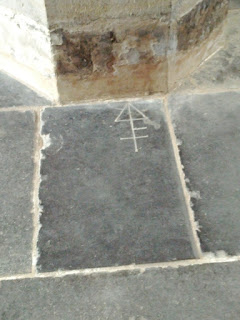 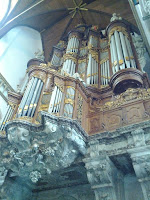 After the canal trip we went on another long walk and ended up walking through the Red District. It's actually rather tame during the late morning, just a little more trash than the rest of the city. Architecturally though it's as picturesque as the rest of Amsterdam. On a whim we went into the Old Church. Admission is not free, but it is cheap, and was totally worth it! The church is absolutely stunning inside! During the Reformation, the Amsterdam Calvinists went a little nuts smashing and dismembering the Catholic pageantry inside the church, but they stopped short of smashing the magnificent organ or the stained glasses. Actually, a Catholic church devoid of most of its gilded trappings is very interesting - you get to see the bones of the building so to speak. It's being renovated so some of the stained glasses are not on display, but it's still really interesting. Speaking of interesting, the floor of the church are all tombstones going back 700 years (35 generations lie buried in the church). So you're literally walking on dead people, all of them the rich and/or famous citizens of Amsterdam. Also, if you're observant you'll see that some tombstones bear mysterious markings (or maybe these are just acronyms), including what looks to be alchemical or kabbalistic signs. Or maybe I've watched too much Indiana Jones and read too much of Neal Stephenson's Baroque Cycle.

Anyway, afterward we popped into the Hermitage Amsterdam museum. It's is a sort-of extension of the famous Hermitage museum in St. Petersburg, and its collection gets changed twice a year. I've seen most of what they had this time around when I was in the actual Hermitage, but it might be worth visiting again in the future. Another small museum that's very interesting is the Rembrandt house, it's restored to the time when Rembrandt lived in it, and it contains some of Rembrandt's sketches, letters, and assorted knick-knacks. After some more picturesque walking we finally arrived at our ultimate destination - the Van Gogh museum. It's not just Van Gogh there though, there is also a collection of paintings by his friends and contemporaries, very interesting collection of late 19th/turn of the century posters, illustrations and lithographs, and the Japanese ukiyo-e prints that Van Gogh brothers collected. Word of warning though, the line-up is quite long, either go there early in the day or obtain an advance pass. There are museum passes being sold in most hotels and tourist shops that let you skip the line. If time is off the essence, it might be worth it, especially as regular admission to Van Gogh and Rijkmuseum is not cheap.

The day concluded on a sour note as Germany lost to Italy 0-2. Going out to watch the game was fun though, huge crowds, very boisterous, looking forward to watching the final game (although by then I'll be either in the Hague or in Bruges). Today looks like it's raining most of the day, so I'll be indoors in Rijksmuseum most of the day! Rembrandt ftw!
Posted by Unknown at 12:51 AM