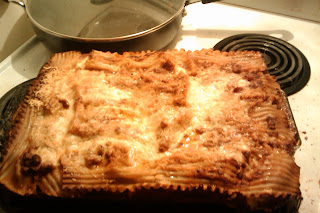 Lasagna is one dish that I have been intimidated of cooking since time immemorial. No more I say! Thanks to chef Michael Smith's excellent recipe, homemade lasagna is easy to make. It's an extremely tasty recipe, the only downsides being that it's rather expensive to make, and messy as well. Without further ado - the Speedy Lasagna!

Now I do vary the recipe somewhat. What I do is also mince (or use a food processor) three or four bunches of spinach to put into the cheese sauce. Also, I find that putting some extra mozzarella or cheddar cheese on top 15 minutes before the lasagna is supposed to be ready is also quite tasty. Instead of italian sausages you can use ground veal, or put in an extra 1/2 pound or 1 pound of ground beef. Add other veggies (sweet peppers and tomatoes work well in this recipe, and I already mentioned spinach) and remove the meet (and put in some extra cheese) for a vegetarian lasagna. Bon appettit!
Posted by Unknown at 2:24 PM No comments: Links to this post

I'm just copying and pasting a passage from a Globe and Mail article on Harper and Bev Oda/Kairos controversy because it so encapsulates all the rage and disappointment I feel about our Prime Minister and the ineffectual opposition:

He silences whistle-blowers and punishes dissenters.

He treats Parliament with open contempt and brazenly lies when found out.

He suspends Parliament at the first sign of political risk.

He makes a mockery of the accountability and transparency he loudly demands of everyone else.

He makes lying to parliament just another tactical device.

He fakes his budgets by refusing to cost new initiatives.

He transforms vital watchdogs of democracy into mushy lapdogs.

He unleashes ministers to attack judges who make unwelcome decisions. He personalizes attacks on his “enemies”.

He blithely smears other parties, groups and individuals as anti-Semitic.

He is impervious to the democratic spirit that has galvanized hundreds of millions of people to stand up for freedom.

He makes major economic decisions on the basis of their impact on his electoral fortunes.

Makes you wonder why Canadians aren’t yet out on the streets in the millions. Instead, Michael Ignatieff demands that Bev Oda be fired.

Posted by Unknown at 9:32 AM No comments: Links to this post

What I've come to realize is that for the most part sci-fi and fantasy writers depend on certain tropes and styles of writing and rarely step outside of those tropes and styles to examine other types of fiction. Patrick Rothfuss writes very well, but what sets "Name of the wind" from most other fantasy and has distinguished him so much among the fans of fantasy fiction is not the originality of his world (because it's hardly original), but how he writes. He exposes the typical sci-fi/fantasy fiction reader to styles and tropes that are not typical to these genres, therefore setting himself apart and appearing original. Same reason I suspect that Mieville has had to much success.
While Rothfuss looks to autobiographical/storytelling styles of fiction, Mieville looks to Pahlaniuk's urban fiction/stream of consciousness/minutae OCD style. Neither are found in sci-fi/fantasy very often, and thus both appear as a breath of fresh air.the styles and tropes in mainstream fiction have changed a lot since then. And personally I find that far too many sci-fi authors are still writing like Asimov and Clarke and Heinlein and Vance were still alive (which would have been bold and original - and was - back in the day), while too many fantasy authors write quite blandly. Rothfuss, Mieville, Stross (I'm talking about his more out-there books rather than Laundry Files books), Vance, Gaiman, Susanna Clarke, Ursula LeGuin, and several others look outside of the established sci-fi/fantasy/horror mielieu for different styles and tropes. That's what differentiates them from yet more "elves with swords" or yet another "military space opera with blasters and FTL travel and aliens" (here's looking at you Tanya Huff) that cram bookstore shelves.
Posted by Unknown at 10:25 AM No comments: Links to this post

How do I know that Jesus is coming? Because I just used a debit machine in Tim Horton's!!! And it worked!!! My life does occasionally intersect with little miracles.
Posted by Unknown at 7:32 PM No comments: Links to this post