"We are locked in history, they were not"

This to me is the pivotal phrase in Werner Herzog's documentary film "Cave of Forgotten Dreams" about the Chauvet cave where the oldest known cave paintings have been found. I will not speak of the film's creative merits (tremendous as they are), or the technical merits (a better application of 3D technology I cannot think of), or its philosophical meaning (ponderous and intrusive as it may be). Instead I found myself thinking of what it means to live inside and outside of history.


We live in a world that is at once as future-oriented as it is mired in the past. We worry about the future nearly as much as we worry about the past it seems to me. Yesterday and today there was yet another spat of missile exchanges between Palestinians and Israelis. Who struck the first blow in this very recent exchange quickly turns into a question of who struck the first blow. Ever. Period. We are - despite tremendous technological progress - very conservative species. We are quick to grab to whatever flotsam we can and turn it into conventions and traditions - the past is far more important than the present in our psyche. Even our imagined future is only an extrapolation of what we know about the past and the present. 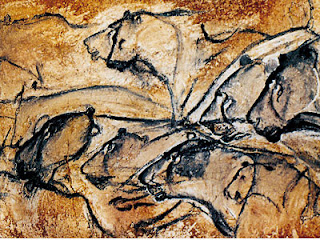 Imagine people living outside of history. They have no records of what happened 50 years ago, or 100 years ago, or 6000 years ago. There are cave paintings, stories and myths, songs and carvings. They get periodically updated (as Australian Aborigenes touch up ancient rock paintings as a sign of respect and bonding with their ancestors), but they are timeless. They might as well have been created 50 years ago as 30,000 years ago. The future rarely exists beyond a year. Only the immediate future is regarded with any degree of anxiety. Anything farther than that is regarded placidly. There is something comforting in this fatalism. Do not worry about another Great War. Do not worry about the C
old War turning hot. Do not worry about the climate change, or recession, or a flu pandemic. Be born, grow up, raise children, pass on what you know, die.

The cave painters of Chauvet are such people. They regard the world around them with reverence I think. Look at the details of the paintings of animals. They are not being hunted in these paintings (unlike the more recent ones). They move, they fight, they run, they hunt, they copulate. There is joy in the paintings, the awareness that the humans are not the pinnacle of creation - they are merely given the gift of active observing. The paintings in Chauvet Cave were made over approximately 5,000 years. People came back to that cave, over and over again. They relighted the fires. They made obeisance before the bones they carried to the cave. They touched up earlier paintings and made new ones. They left their hand prints in ochre paint. An autograph? A link to the past? A link to the future? There is awareness that time passes, but I get the feeling that it was a calm acceptance on their part that time flow. It's all the same. Imagine being a paleolithic artist walking into the cave. You see paintings left behind by your predecessors. These paintings could've been done by your grandparent. Or they could be done by an artist dead for 5,000 years. It makes no difference. You pick up your coal or ochre and start painting beside or around the older images. What does it matter when the older image was painted? It's all the same. 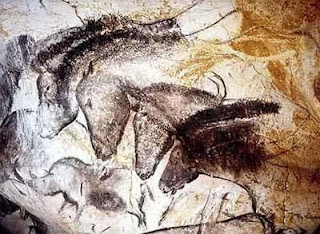 How long will our creations last? The oldest known structures still standing are barely 6,000 years old. That they still stand is not really a testament to the ancient builders, but to the materials they have chosen, the climate, and sheer luck that they have not been toppled by earthquakes, drowned and washed away by floods, or taken apart brick by brick (or stone by stone) by their enterprising successors. Alan Weisman's excellent book The World Without Us takes a serious and sobering look at how quickly nature returns when we are gone, at which of our creations will endure. It will not be long for our most magnificent creations to cease. In the grand scheme of things we are, as a poet once said, "But a beat within the heart of time". So let's enjoy the moment and stop worrying about the past and the future once in a while.
Posted by Unknown at 6:23 PM No comments: Links to this post