Amsterdam Day 3, the Hague, and Volendam 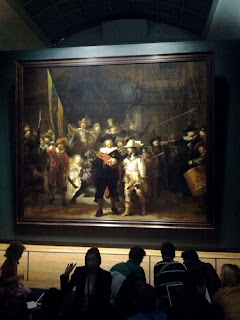 Since I was too tired to post impressions of day 3, it'll have to be now instead and be relatively short. Yesterday we visited the Rijksmuseum, which is located maybe 10 minutes from the hotel. It is a lovely and imposing building, even though it's being renovated right now. The museum itself is unfortunately half as big as it usually is due to these renovations. Still, the exhibit of famed Dutch ceramics, silver and gold ware, historical artifacts (weapons, costumes, etc), and most importantly the classic Dutch painters on display is still impressive. It's well worth a visit considering that some of Rembrandt's, Vermeer's, and Jan Steen's famous paintings are on display. The Night Watch is really quite something seen live... but there are other gems as well. Vermeer's Milkmaid is lovely, as are the rest of Rembrandt's paintings on display, and I also quite liked Adriaen van de Venne's Fishing for Souls painting. Almost forgot, photographing paintings is allowed sans flash, which is quite a big deal. 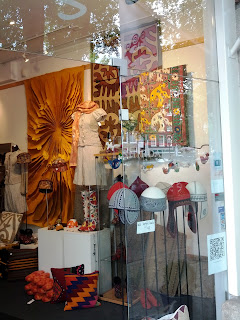 After the Rijksmuseum we stopped at an excellent antiquariat and print shop that I highly recommend to everyone visiting Amsterdam. It's called Antiquariaat Hoogkamp, located at Spiegelgracht 27s and they have a website here. Honestly, skip buying fancy prints at museum shops and check it out - the variety and quality (and prices) are excellent. Afterwards we went for a walk in the Jordaan distrtict. It has nothing to do with Jordan, but is rather a Dutch way of pronouncing French word "jardin" - garden. This is a bohemian art district, and it's instantly obvious. There's an art studio literally on every block (sometimes more), more street music, and the shopping is far more interesting than the usual tourist traps in the centre of the city - check out these awesome knitted kyrgyz hats. It's also a very scenic and colourful walk and a very interesting neighbourhood to visit, so I highly recommend it. For eating we were very satisfied with this place - Amigo grill. A grand walk to visit all the remaining major sights in the core of Amsterdam concluded the day. We finally checked out the other famous churches, the royal palace, and some other sights. By the way, the New Church is very beautiful inside, but is far less interesting from a story point of view than the Old Church and the admission price is highway robbery. At the end of the day, we decided to try authentic (I hope it was anyway) Dutch cuisine at De Blauwe Hollander and it was really quite good. But by the end of the day I felt like a change of scenery was needed. 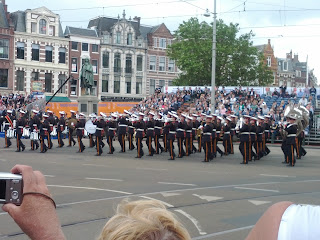 For such a small country Holland contains an infinity of spaces. The green stretches to the horizon interspersed only with gleaming canals and thick copses of threes. The sea likewise stretches into the gray haze. Unobstructed by buildings of the cities and towns, the flat lines of Netherlands stretch into nothingness. It makes even a simple drive through the countryside more beautiful than it ought to seem. The enormous modern windmills and the quaint classic Dutch windmills aside, the countryside is very nice - the transition from a city to the country is very abrupt though. Blink and you miss it. Our destination was the Hague. On first impression it is a more outwardly modern city than Amsterdam, a lot more office buildings and high-rises on the outskirts. The city core, despite having more modern buildings than Amsterdam, still retains its older charms. Although we initially wanted to visit the Mauritshuis museum where an excellent collection of Vermeer, van Dyck, Jan Steen, Rubens, and Rembrandt is kept, we were delayed by the Netherlands' Veterans' Day parade, due to which all the museums were closed in the morning! So we wandered around the old city core, got to see the other royal palace (more medieval and more pretty than the one in Amsterdam), the royal stables (the size and magnificence and age of which put our Parliament building to shame), the Peace Palace (where the International Court of Justice tribunal sits), and some other interesting spots. The Hague is a very stately city, quieter than Amsterdam, with somewhat less canals but no less ubiqutous bicyclists, more spread out and interesting in its own right. It reminded me of Ottawa quite a lot. The parade was quite interesting and good spirited, and there were Air Force fly-bys and we got to see (from a distance) Prince of Holland, but started to drag on. Visiting the Mauritshuis again we discovered that it's actually closed for renovations until 2014 and that Vermeer's "Girl with a Pearl Earring" is actually on display closer to home - in United States' Finck museum. The rest of the exhibit was moved to the Gemeentemuseum - so go there instead if you are in the Hague. The exhibit was quite impressive even without Vermeer, and included some more modern artists like Kandinsky. It's well worth it. 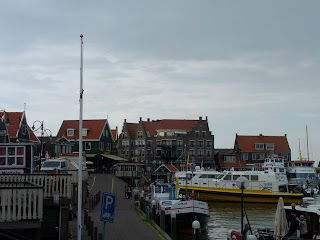 After the Hague our last destination of the day was a large fishing village (a town would be more appropriate) of Volendam, famed for its fresh and salted seafood (and really the gastronomic reason was our only reason for visiting). It is, however, a lovely spot and a chance to see how the less urbanized Dutch people live (short version - nicely). The Marina is very nice and the North Sea is - well - a sea, if you're into that sort of thing. The best smoked fish is to be had from street vendors rather than the pricier restaurants. Since much of Holland is within 1-2 hours of driving from Amsterdam, you don't feel like you're missing out on visiting Important Tourist Locations by stopping at smaller and equally nice less-visited places. Tomorrow a long trip to possibly Antwerp and Haarlem, and ultimately Bruge!
Posted by Unknown at 1:18 PM