This short story started as a humorous free-write on this traffic sign, and then turned into something else entirely. It's not polished or anything, but I hope you enjoy it. 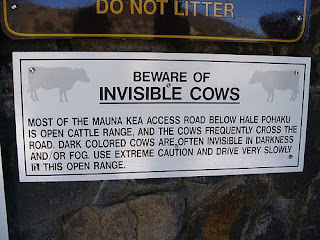 “And there it was,” Mike complained. “What was?” asked the confused deputy. “You know, sacrosanct belief in the invisible hand of the market. It just came out of nowhere, and I couldn’t swerve. My bumper’s totally ruined.” The deputy sighed and took a long look at the slick pavement: “Look, I don’t see anything.” Mike angrily kicked the air: “Of course you can’t, it’s invisible.” The deputy rolled his eyes and jotted down a couple of lines in his notpad: “Then how do you know it was the sacrosanct belief in the invisible hand of the market?” “What else could it be? Pete hit the sacred belief in the goodness of man just last week, it’s not like there’s a lot of them sacred cows left. I tell you, the county should really put a sign here.”

The deputy gave out another sigh and looked over the forlorn fields stretching on either side of the road. Dealing with deaths of metaphysical concepts was just not what he signed up for. Writing up speeding tickets, breaking up a drunken brawl once in a while, or talking down a domestic dispute, those were easy and understandable, and that’s what he was trained to do. What was he supposed to do if a local farmer ran over the belief that education could better someone? This was probably the fourth time he had been called out here, and the county vet’s office had given up on trying to resuscitate the deceased bovines. “Look,” he told Mike after taking another look at the landscape, “I’ll go and talk to Mr. Werner and explain to him that he’s gotta mend that fence. All those ideas wandering around are dangerous alright.” Mike exploded: “And who’s going to pay for my bumper? Those cows of his are a dying breed anyways, I have to pay the bills and getting my truck fixed up ain’t going to help that!” “Alright, alright,” the deputy held up his hand, “I’ll go and talk to Mr. Werner and see what we can work out. Meanwhile, I’ll call you a tow truck.”

A slow drizzle set in on the way to the Werner Farm. The road showed no signs of any recent repair, and the deputy felt every bump and pothole on the way there. The fences have not been mended in a while; business clearly wasn’t going well for Werner. An old crease-faced woman watched impassively as the deputy pulled up. He got out, stifling a curse as some water managed to get under his collar, and donned his hat: “Got some bad news for you Missis Werner. You got yourself another stray.” The woman spat, “You talk to my husband. He’s inside.” The farmer was inside and already deep in his cups. He got up to his feet unsteadily and offered a shaking rheumy hand; hard life and deaths of Big Ideas left their mark on a once young and vigorous bull of a man. “Which one?” he wheezed. The deputy picked at the brim of his hat: “invisible hand of the market, Mr. Werner sir. Wandered through the western side of the fence, went right into Mike McGill’s pickup.”

“Ah goddammit,” complained the old man, “time was them sacred cows could just bounce back, ain’t nothing that could kill them. I tell you, these modern cynics are even worse for business than those hippie vegetarians. What am I supposed to do with the carcass now?” The deputy was beginning to be irritated: “Now look Mr. Werner, you gotta mend your fence. Having all those ideas wandering around the countryside is just too dangerous. Next time it could go through the windshield head on, could maybe kill someone. You know how it is.” “Time was,” the old man rambled on oblivious, “these things mattered. They were sacred, sure they just stood there and chewed up the countryside, but by God they mattered. People would come from afar to look at them. The Flat World, Creation in Seven Days, Fair Wage for Fair Labor; all gone now, all gone.”

“Look Mr. Werner. You just fix that fence before someone gets hurt, or another one of your cows get run over. Next time it’ll be the Sheriff coming out here, ok?” He stood up, and stretched. He thought about offering his hand again to the farmer, and turned to the door, tipping hit hat to the old farmwife. He stood on the porch for half a minute and walked to his car. The drizzle was lifting, and somewhere in the distance a cow lowed.
Posted by Unknown at 9:29 AM No comments: Links to this post