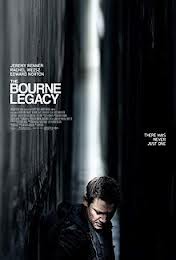 I'm a big fan of the Bourne series, so I waited with some anticipation for the reboot/quasi-sequel - "Bourne Legacy". In hindsight, I should have curbed my enthusiasm - "Bourne Legacy" is a competently assembled film with excellent cast, but it fails to deliver the thrills or advance the plot of the franchise in any meaningful way.

For those unfamiliar with earlier Bourne movies, the short synopsis is that a secret U.S. program has been creating experimental super spies/assassins, using behaviour modification, drugs and gene therapy. Jason Bourne is the product of this program, he loses his memories, go rogue, and by the end of the third movie has exposed the program and its sinister shadowy government handlers. Bourne Legacy takes place chronologically just before the third movie and ends at the same time as the third movie in the series does. In my opinion a moviegoer who has not seen the previous three films will be confused throughout the first act of Bourne Legacy. Not a small amount of confusion for a newcomer to the series will be that the namesake of the series - Jason Bourne - does not make an appearance at all. This movie deals with the consequences and ramifications of Bourne's actions on the program and the people involved in it. There will be explosions, chases, parkour, and fighting wolves with bare hands. There will also be long, tedious expositions, meaningful looks being thrown, and a couple of exotic locales.

The main characters of "Bourne Legacy" are Jeremy Renner playing another rogue agent of the program that created Bourne, Rachel Weisz as the scientists involved in the program who's trying to help Renner's character, and Edward Norton as the government hatchet man in charge of covering up the program. Many faces from the original trilogy also make appearances. The cast is excellent and Renner's and Norton's performances particularly stand out. Renner brings humour, humanity, and dignity to the role, and Norton has a frigidly calm professional demeanour dripping with sinister insinuations. Weisz - an actress I've adored for many years - is generally good in her role, but nothing to write home about.

So why didn't I like the movie then? It's actually rather difficult to formulate, but a few points stand out. For one thing there isn't enough globe-trotting going on. Most of the film happens in the U.S., and indoors, and could be set really anywhere, unlike some of the original series where much of the action happened all over the glove (OK, Europe mostly) but in recognizable locales that actually made sense in the story. In "Bourne Legacy" the final climatic chase/fight scene happens in Manila, but it is never explained why drugs for secret U.S. government program would be manufactured in Philippines - isn't Mexico or Costa Rica closer? The addition of Manila as a set piece feels very tacked on and random - maybe the studio got a grant from the Philippines government?

Another gripe I have is that "Bourne Legacy" doesn't throw much of a bone to newcomers as I've already mentioned. We get flashbacks to second and third movie, there's constant talk about Jason Bourne, various names and code names from the previous movies get tossed around without providing much background on it. In fact, the plot in general is poorly written, the pacing is either too slow or too fast (you know there's a problem with a spy thriller when you check the watch in the middle of an action scene to see how much time has passed). There are many expositions and cut-aways to show what's going on while the main characters are doing their shtick, but these just serve to confuse the viewer and slow down the pact of the movie. Other than a gripping scene in a laboratory, none of the action scenes succeeded in being memorable or tense.

But by far my biggest problem with this film is how unnecessary it is for the trilogy. Its goal is to show us the repercussions of Bourne's actions in the original trilogy, and introduce new characters who will carry the franchise forward, but "Bourne Legacy" does not advance the overall plot of the series in any meaningful way. It ends the same way that the third movie does (spoiler alert!) - the program has been exposed and now the media is all over it and there is a senate committee investigating it. What else do we learn? Only a bit more thorough explanation as to how the program succeeded in creating super agents, and a bit more background on the scientists involved in the program. That's about it. If this film was meant to be a reboot - it didn't feel like it as it required too much prior knowledge. If this film was meant to be a sequel - it didn't succeed either because it doesn't advance the plot or the characters from previous movies. Bourne Legacy was a competent, but ultimately thrill-less thriller.
Posted by Unknown at 10:23 PM