This review post is rather late because I was both crazy busy and crazy lazy at the same time, and Fallout 4 came out and yeah, I'm out of excuses. Instead, I'm going to do a pile of mini-reviews at once. But we are going to do this as stories, because one of the things I love about board games (good ones anyway) is that each game is a unique story.

We begin in ancient times, on the coast of eastern Mediterranean, near the Fertile Crescent, the birthplace of... Advanced Civilization! There, on the banks of the Upper Nile, a small tribe begins its migration northward, pressured by population growth and hunger for victory points! And victory points, as any student of history can tell you, come from cities and luxury resources! They grew and prospered, spreading west into Africa and north into Sinai and Judea where they came into conflict with a migrating tribe of... the Blue People! (honestly, I can't recall what the actual name of the faction was - it was either Hittites or Asiatics, the point of the story is...)
The great Yellow People (a.k.a. Egyptians) rolled the Blue People, but then worked out a peace treaty and commenced lots and lots of trading in the hopes of creating sets of resource cards that could be used to create ever more glorious technologies like sail-weaving and pottery and yarn-making. So it went through several ages, more cities arose, more sets of cards were assembled, and the mighty Yellow People fleet kept the country safe for a few hours until we ran out of time and had to cut Advanced Civilization short. In brief, Advanced Civilization looks intimidating as hell and the rules are not well-written, but it's actually much easier than it appears. It's a game of area control, deck building, and negotiation, and it's a lot of fun at first; however, it outstays its welcome after the first two ages (I think there are four or five in total? I can't accurately remember). After the first age I've pretty much experienced all there was to the game and its mechanics. It's a grand game but it's not worth the 6-8 hour investment to actually finish it properly. I also felt that a big thing this game was lacking was some differentiation between the different civilizations other than starting location. Basically all civilizations are identical in every way and have access to the same technologies. That was quite a big flaw in my opinion.

We skip a couple of thousand years to the rainy shores of... Britannia! There, a bunch of tribes live more or less peacefully. Doing their stuff. Welsh are welshing, Picts are picting, when out of the misty southern fog suddenly... A WHOLE CRAPLOAD OF ROMANS APPEARED! The Romans kicked some major butt, but couldn't quite conquer northern England (held off by the Brigantes) or Wales (held off by the Welsh). Eventually Romans were replaced by Roman Britannians who were promptly wiped out by invading Saxons and Angles. Meanwhile in the north, the Picts and Brigandians were stubbornly staying alive against invading Irish, Scots and remaining Caledonians. However, with the Welsh-Angle alliance holding Saxons down, it seemed like Britannia's troubles would soon be over. Even Brigantians mostly stayed in their hills. A few centuries passed by uneventfully (if by uneventful you mean Irish constantly landing on western shores and taking heads. Which is exactly what I mean by uneventful). When suddenly Vikings! 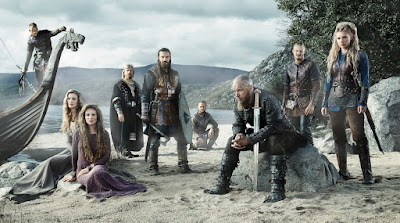 OK, they weren't this handsome, but close enough. The Norsemen, the Norwegians, and some other Scandinavians I can't remember now pretty much slaughtered everyone. Even the Picts, who managed to wipe out the Scots, were themselves finally wiped. Only the Saxons were holding on, stabbing the Angles in the back when they were invaded by Norwegians. When just as suddenly, the Normans landed and started killing Saxons like they were going out of style. Except William the Conqueror turned out to be William the Unlucky when he tried to take out the Saxon king, rolled like shit and died himself. Leaving the Norwegians to pick up the pieces and become the winners.

Basically in Britannia, players take on successive waves of invaders trying to take as much of provinces in Britain as possible while amassing as many victory points as possible (which is totally historically accurate - I checked wikipedia).
If this sounds like Smallworld, that's because Smallworld was actually inspired by the original edition of Britannia (I played the 2008 FFG reprint). I quite enjoyed this game, it has a lot of replayability (there are a ton of different invaders to try and you don't always get the same invaders to control), it's actually very historically accurate so it's great for teaching Dark Ages history of Britain, and it's not a very complicated game. The randomness of dice rolls in combat can turn off some people but I enjoyed it in this game, and also it's not very easy to find. Personally I'd love to play it again a couple of times.

Staying in Britain, but almost six hundred years later, an ambitious English captain is hiring an intrepid crew, outfits his ship - The Golden Hind - with the finest cannons and sails, and stocks provisions for a trip to the Caribbean where riches and glory await. The captain's name? Francis Drake. Even before he sets out, there is a great element of risk. Will he woo the Virgin Queen in hopes that she will grant him additional money and supplies? Petition for a chance to be the Admiral or the Governor of English possessions in the Caribbean? Attract more investors? Hire spies? And most importantly, should he sail ahead of his competitors who are likewise preparing for plundering voyages of their own? At last he feels ready to sail. He arrives in the Caribbean ahead of his competitors but sadly he didn't bring enough supplies so he focuses on trading for indigo and attacking the weaker Spanish outposts, while his competitors chase Spanish galleons and attack the great cities of Havana and Panama. Disheartened, the English privateer returns home to outfit his ship for a second voyage.

Francis Drake is a pretty awesome worker placement game with a very strong theme. Actually it's two worker placement games in one. The first one is about outfitting your ship, but the way it's done is quite intriguing. The potential actions are laid out with cards in a row, but once you commit to a card you can't do an action on any of the previous cards in a row, you can only go forward, plus you are competing for actions with other players. The second worker placement game in Francis Drake is in voyaging to the Caribbean, attacking Spanish forts, towns and galleons, trading for goods and other shenanigans, in order to (drumroll please!) get victory points. This is done by placing disks with numbers, and as players stack those disks on top of each other, there's an element of bluffing. I really liked this game. More than Advanced Civilization or Britannia, this is a game that I would love to own.

Thousands of years in the future, in a galaxy far away from England or Mesopotamia, a faction of religious dissidents sets out to usher in a new galactic renaissance, but only if the dice fall in their favor as they Roll for the Galaxy! Finding themselves on the run, the religious dissidents make an alliance with other outcasts and separatists in the far away systems of the galaxy. Finding an extremely advanced lab, they research the secrets of nanotechnology which makes them an economic superpower in the long run. They construct great docks to carry their goods and their religious creed to the rest of the galaxy and finally bring about the great galactic renaissance of peace, prosperity and cultural growth that was spoken of in their prophecies.

So there we have it, four games. One venerable classic that turned out to be so-so, a delightful historic game with some replayability, a fantastic worker placement game with a strong theme and equally fantastic deck/dice building game. Soon, I hope to review Trains, Exploding Kittens and a couple of other new games. Until then, Merry Christmas and Happy New Year's!
Posted by Unknown at 1:09 PM