Information wants to be free 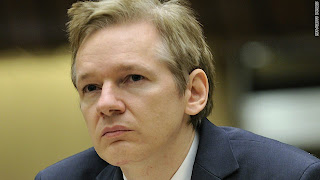 Exposure of government crimes should not be a crime. I expect right-wing loonies in the U.S. to call for treason charges and even death penalty for Julian Assange (nevermind that he's not a U.S. citizen). But when CANADIAN government officials are suggesting charges of treason and other charges, that's when we know that there IS problem with our system of governance, and that Assange is doing the right thing! If we do not hold our governments accountable, then they WILL become like Taliban or North Korea, but they'll be controlled by corporate interests or whatnot, instead of loonie Communist dictators or fundamentalists.What Wikileaks is doing is exposing government secrets that SHOULD be exposed. People in democratic states are entitled to the right to know what their ELECTED government is doing. Governments trying to go after Wikileaks demonstrate the unwillingness of our gov'ts to give us that right, therefore exposing them to be non-democratic regimes.
If it does not require the likes of the Wikileaks then why are governments trying to shut it down? Why is actually so hard to hold our governments accountable? Why does it take whistleblowers to show us what our governments really up to? I think Wikileaks actually fulfills a public service. how can people make informed choices about what the state is doing, and whether it's acceptable, if they don't have free access to said information? And what are we to make of the persistent muzzling of the media (one of the very watchdogs you're talking about) by democratic governments? Why is it that the media has to rely on the findings of these 'dilettantes' rather than the other way around? Why are Wikileaks and similar sources publishing information that our so-called free press does not? Governments must be held accountable to their people, and free access to information about the governments' activities is the first step in this accountability.
Posted by Unknown at 6:49 PM